Rumored to be a Savannah Haunted Hotel 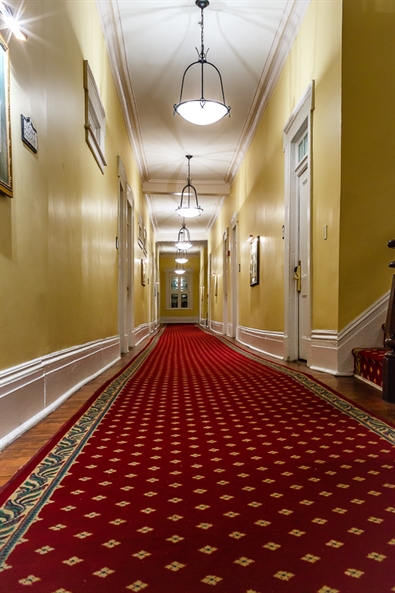 About Savannah's Haunts and Ghosts

As the oldest city in Georgia, it’s no surprise that Savannah has its share of haunted attractions. From shanghaied sailors at the Pirates House to strange, unexplained happenings at at many of the city's historic buildings, you’ll find a ghostly presence no matter where you go in Savannah.  At The Marshall House, we embrace the City's haunted reputation and enjoy the spirited good fun it brings.

Hauntings at The Marshall House?

The Marshall House's history as hospital during the Civil War and through two yellow fever epidemics, makes it very conducive to ghost stories and haunted tales.  Take any of the local ghost tours, and you'll hear plenty of stories!

Rumors and reports include guests seeing ghosts in the hallways and foyers, hearing children running down the long, narrow halls late at night, faucets turning on by themselves, and much more.  With such tales abounding, our rumored haunted hotel in Savannah has been featured several times on the Travel Channel's haunted hotel programs and specials.

Here's a look at some of the publicity The Marshall House has received due to its haunted reputation:

The Marshall House was selected as #5 in a USA Today's 2015 10 Best Readers' Choice travel award contest for Best Haunted Hotel.

Wonderful Hotel For Our Romantic Trip to Savannah!

"Wonderful hotel for our trip to Savannah. The staff at Marshal House very graciously accommodated the nuisance of my mobility scooter during our January holiday. The kindness and attention to detail of their valets was particularly helpful and went well beyond professionalism; I felt genuinely welcomed. The hotel’s location was perfect for easy access to downtown Savannah’s excellent sidewalk culture, the public areas of the hotel are lovely, and our room was generous in size and very satisfactorily equipped. We will definitely join them again."
Reviewed by familytravelinstyle on 2020 via TripAdvisor --- See More Here
The Marshall House 123 East Broughton Street Savannah, Georgia 31401 United States Phone: (912) 644-7896 Toll Free: (800) 589-6304