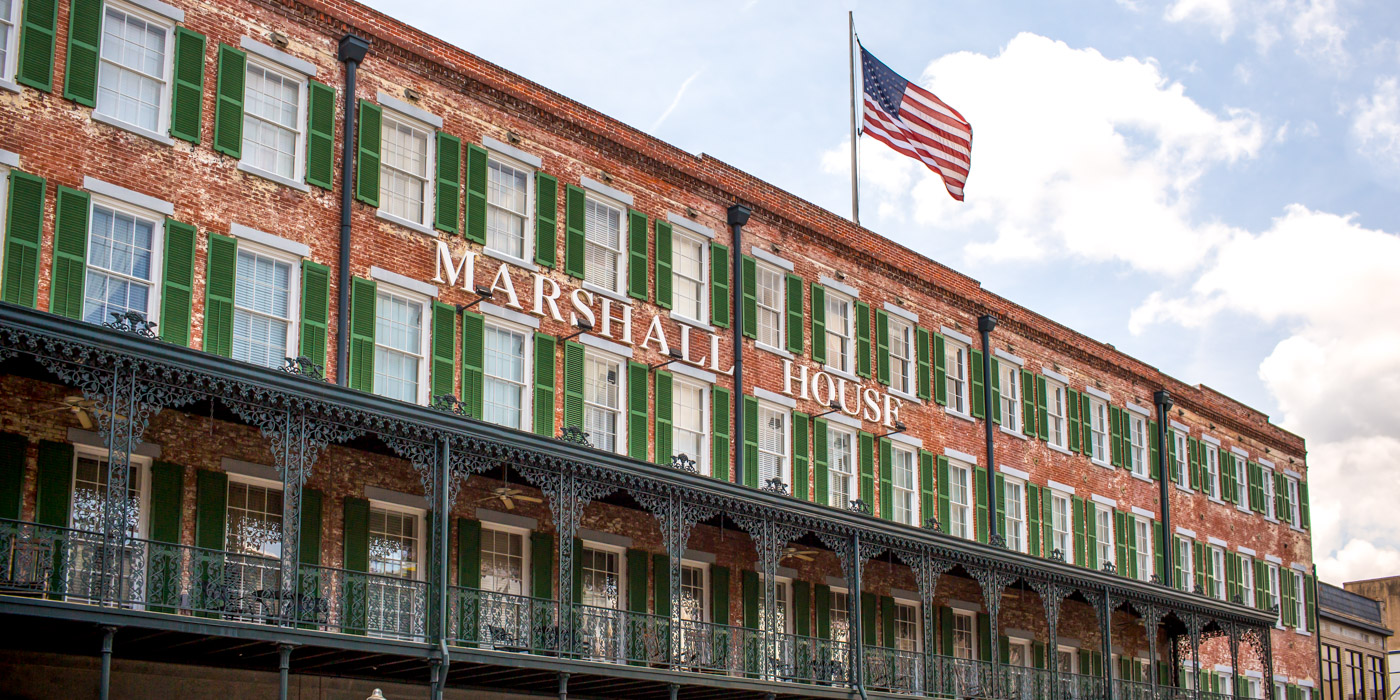 The Unique Story of The Historic Marshall House Hotel Savannah

Here's a look at what makes The Marshall House one of Savannah's most interesting hotels in the historic district.

7 Fun Facts About The Marshall House

1.  Mary Marshall is still here...in a portrait painted by Peter Laurens in 1830.  The portrait currently hangs behind the front desk, so Mary greets every guest at check-in.  The painting was purchased from the Estate of Jim Williams, a well known Savannah preservationist and antiques dealer made famous by the book Midnight in the Garden of Good and Evil.

3.  Our First Guest Review was Published in 1852.The Savannah Morning News published a heart-felt endorsement on July 31, 1852:  “Following the advice of a friend, I stopped at the Marshall House, a new first class hotel, opened here a few weeks ago.  The parlors and sleeping rooms are handsomely furnished.”   Modern day reviews rank The Marshall House consistently among the top Savannah hotels.

4.  The verandah wasn’t original to the hotel.   The 120-foot iron verandah was added in 1857, six years after the hotel was constructed. Ralph Meldrim (owner of the Green-Meldrim House where General Sherman stayed during the Union Troops occupation of Savannah during the Civil War), was proprietor of The Marshall House at the time.  It was re-constructed and replicated during the hotel’s major renovation in 1998.  It’s now considered an iconic symbol of the property, and its a favorite for returning guests.

6.  Joel Chandler Harris lived here.   Famous for authoring the “Uncle Remus” stories, Mr. Harris was also the associate editor at the Savannah Morning News and was considered Georgia’s leading humor columnist at the time.   Mr. Harris lived in the “Florida House” – a boarding house that later became a part of The Marshall House in 1880.

Centrally located in the Heart of the Historic District

Today, The Marshall House is truly in the center of Savannah's historic district activities.   Just outside our front door on Broughton Street, you'll find some of Savannah's best shopping and dining opportunities.  Walk five minutes in one direction, and you're on River Street. Head out in another, and you’ll find yourself in the hustle and bustle of City Market. Savannah's famous squares, historic homes, and top local evening venues are all within walking distance.

Walking Distance from The Marshall House in Savannah:

Wonderful Hotel For Our Romantic Trip to Savannah!

"Wonderful hotel for our trip to Savannah. The staff at Marshal House very graciously accommodated the nuisance of my mobility scooter during our January holiday. The kindness and attention to detail of their valets was particularly helpful and went well beyond professionalism; I felt genuinely welcomed. The hotel’s location was perfect for easy access to downtown Savannah’s excellent sidewalk culture, the public areas of the hotel are lovely, and our room was generous in size and very satisfactorily equipped. We will definitely join them again."
Reviewed by familytravelinstyle on 2020 via TripAdvisor --- See More Here
The Marshall House 123 East Broughton Street Savannah, Georgia 31401 United States Phone: (912) 644-7896 Toll Free: (800) 589-6304